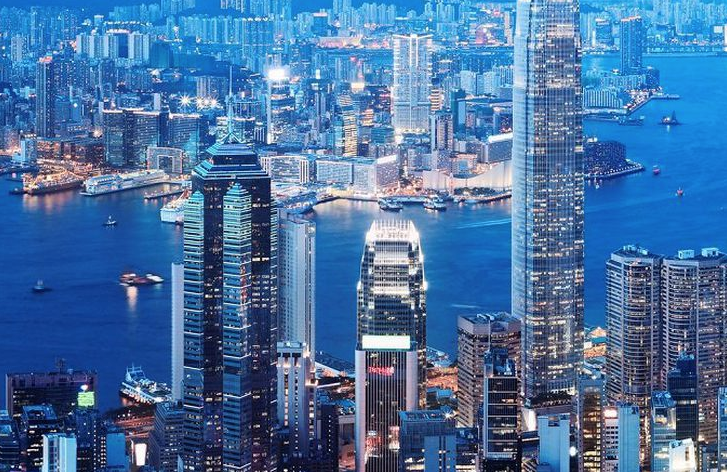 Since launching in 2014, Stock Connect has helped bolster Hong Kong’s role in connecting the Mainland with the rest of the world. Nicky Burridge finds out how else the cross-border access scheme has impacted Hong Kong,

how investors have benefited, and what the current issues are Illustrations by Ester Zirilli

More than US$60 billion of foreign money is expected to flow into Mainland Chinese stocks, known as China A-shares, during 2019 following a decision by global index provider MSC earlier this month to increase the weighting of Chinese equities in its benchmark indices. The move will see the proportion of A-shares in MSCI’s Emerging Markets Index quadruple from 5 percent to 20 percent.

First launched in November 2014, the Shanghai-Hong Kong Stock Connect enabled interna- tional investors to invest directly in shares listed on the Shanghai Stock Exchange through Hong Kong, while Mainland investors could buy equities listed in Hong Kong. The scheme was expanded in December 2016, with the launch of the Shenzhen-Hong Kong Stock Connect. Today it covers more than 2,000 equities in Hong Kong, Shanghai and Shenzhen.

Stock Connect has had a signifi- cant impact on the investment land- scape since it was first launched. “Historically, there was very little interaction between onshore and offshore investors, with both of them restricted to their respective markets. Stock Connect created a direct linkage between the two exchanges,” says Jason Lui, Head of Equity and Derivative Strategy, APAC, at BNP Paribas Hong Kong,

Ferry Choy, Director of Flag- ship Appraisals and Consulting, explains that prior to programme, international investors had to go through agencies or side products in order to invest in Mainland China’s market. “This was a real obstacle. Now with an account in Hong Kong, they can directly invest in either the Shanghai or Shenzhen exchanges,” he says.

The Stock Connect schemes allow Mainland traders to invest in 417 Hong Kong- listed companies out of a total 2,331 companies listed in the city, as of the end of February,

Lui adds that the scheme gives foreign investors access to some unique stocks that are only listed in Mainland China, suchas liquor, household appliances, healthcare and other new China-type companies. “For domestic Chinese investors, having the ability to buy Hong Kong shares is the first time they could allocate their assets overseas,” he adds.

Alongside the obvious benefits for investors of portfolio diversification, Stock Connect has also had a number of secondary benefits, Choy believes the inflow of cash has helped with the rapid development of private enterprises in Mainland China. Itis also leading to more global buyers holding renminbi, he adds, promoting the internationalization of the currency, which is an important factor in international trade relations.

Lui agrees, saying: “There has been pretty decent growth in terms of the overall Hong Kong market turnover. I remember back in the days before Stock Connect, a HK$100 billion daily turnover used to be the high-water mark, but now we are regularly reaching that.”

“For domestic Chinese investors, having the ability to buy Hong Kong shares is the first time they could allocate their assets overseas.”

“As international companies are looking to do initial public offerings (IPOs) in Hong Kong, more and more money will flow into Hong Kong, strengthening the city’s inter- national position as the international financial centre in Asia.”

Paul Chau, Managing Director of China Galaxy International Securities, and Chairman of the Hong Kong Institute of CPAs’ Corporate Finance Advisory Panel, thinks this creates opportunities for Hong Kong CPAs. “Asa key objective for the programme is to broaden the depth of capital and improve liquidity in both markets,

the securities and asset Managem¢ firms should directly benefit, and therefore so should the CPAs working in these fields, whether if front line or finance functions.”

Another area in which accountants have a significant role to play is in helping to reconcile the two different accounting systems used by companies listed in the Mainla and those in Hong Kong. “One of the existing obstacles is the differe accounting systems in Hong Kong and the Mainland. This issue has become more serious after the j imp] mentation ofnew major internatio standards in Hong Kong, such as Hong Kong Financial Reporting Standard (HKFRS) 9 Financial Instruments, HKERS 15 Revenue Srom Contracts with Customers an( HKERS 16 Leases,” Choy says.

While figures are published daily Oj how much is being invested throug} Stock Connect, there is no publicly, available data on who is behind the investments.

The initial wave of southbound investing is thought to have been dominated by institutional investor : looking to diversify their portfolios] but more recently, Stock Connect appears to have been gaining popularity with speculative and retail investors. “Our impression is that for the first few years, the southbound Stock Connect was more ofan asset allocation inflow, q mainly from institutional i investors, especially insurance companies, | such as Ping An, which is now one of the major shareholders of HSBC, ] says Lui. “I think over the past 12 to 18 months, based on the rapid rotation of top-buying and top- selling stocks on a monthly basis, it seems there has been a lot more so-called ‘fast money.’ We don’t know if this is institutional or retail, but the behaviour suggests that it is no longer just asset allocation.”

He adds that there has recently been a lot more rotation in stocks, with a stock that was a top buy one month becoming a top sell a few months down the road. Kevin Leung, Executive Director, Investment Strategy, at Haitong International Securities, agrees: “Over the past two years, we have seen a lot of Mainland capital flowing into Hong Kong and this has resulted in different trading patterns compared with before.” He adds that before Stock Connect, investing in Hong Kong was driven by institutions and tended to be focused on fundamentals and value. Now it is more momentum driven. Stock Connect is also thought to have played a role in driving up equity prices in Hong Kong.

“For both markets, the capital flows from Stock Connect have become an increasingly important factor because the growing influ- ence of such flows could drive the outperformance of certain stocks or sectors favoured by Stock Connect investors,” says Lam. “In some selected instances we did see stocks having outsized returns, which were potentially driven by Stock Connect flows.”

Choy believes that Hong Kong- listed stocks may have particularly appealed to Mainland investors in the early days due to a percep- tion that they were undervalued. “After the launch of Stock Connect, Chinese investors quickly pushed up Hong Kong stock prices. However, this phenomenon did not last long. It just accelerated Hong Kong stocks to match their real value. I think the effect is a better understanding of the difference in risk and liquidity. As you know, stocks can be freely traded in Hong Kong but less so in China when the market is volatile.”

Lui thinks Stock Connect may also have helped to normalize the so-called “A-share premium” in terms of valuations. “Historically, China A-shares tend to trade at a slight premium over H-shares, and that premium has actually started to come down over the past few years,” he says. “There is no way you could say Stock Connect is solely respon- sible for that, but it certainly makes things a lot easier if people want to express a relative view in one market versus the other.”

Despite Stock Connect making it easier for northbound and south- bound investors to put money into each other’s markets, there are still some restrictions in place, including trading quotas.

“We should think of the investment quotas as a moving target. The regulators have made clear in the past that they have a flexible attitude towards the Stock Connect quotas and can adjust or expand them if and when needed.”

There are few concerns among analysts that the quotas will be reached, with the expected US$67 billion inflow anticipated as a result of MSCI increasing the representation of A-shares in its indices. “We should think of the investment quotas as a moving target. The regulators have made clear in the past that they have a flexible attitude towards the Stock Connect quotas and can adjust or expand them if and when needed,” says Lam.

Of more concern is the foreign ownership limit. Lui explains that under Stock Connect, a 30 percent limit has been put in place on the proportion of shares in a Shanghai or Shenzhen-listed company that can be held by foreign investors. “That seemed a sensible solution, but with the opening up of the Mainland China capital market, we think this 30 percent is inconsistent with where the Chinese market is heading.”

Another area that commentators think would benefit from regula- tory attention is the issue of bonds. “Recently some convertible bonds have been launched by China A-shares. As a shareholder, you have the right to subscribe to those bonds,” Lui explains. “However, if you are holding these shares through Stock Connect, it is cur- rently unclear what the long-term solution for investors to participate will be.”

He would also like to see the investible universe of Stock Con- nect extended from its current level of just over 2,000 equities. Leung agrees: “People are looking for more opportunities to invest in different products anda fully opened-up market to enable both Hong Kong and Mainland investors to take advantage of offerings they can’t find in their local market.

Since it was first launched, a number of improvements have been made to Stock Connect, including the introduction of Special Segre- gated Accounts and real-time deliv- ery versus payment, which enables delivery and payment to happen simultaneously. In 2017, Bond Con- nect was launched enabling cross- border trading in bonds, while there is talk of an Exchange Traded Fund Connect being introduced, possibly as early as this year.

Meanwhile, Stock Connect is in the process of expanding into Europe. Shanghai-London Stock Connect, which is expected to launch this year, will enable international investors to access China A-shares through buying Global Depository Receipts — namely bank certificates for shares in a foreign company ~ traded on the London Stock Exchange, while firms traded in London will be able to list Chinese Depository Receipts in Shanghai. The move will enable international investors to trade A-shares during United Kingdom trading hours. They will also be able to make purchases in a range of currencies, including pounds and euros.

Lui says: “It is our view that the Shanghai-London Stock Connect will look quite different from a trad- ing standpoint. The exchanges, as well as the regulators have done a lot of work trying to facilitate smooth trading operations, but because of the time zone and exchange rate challenges, it may not be a 100 percent replica of the Shanghai- Hong Kong Stock Connect.” In the meantime, Hong Kong continues to offer the easiest route for foreigninvestors wantingto buy A-shares.

標籤: A Plus, accounting